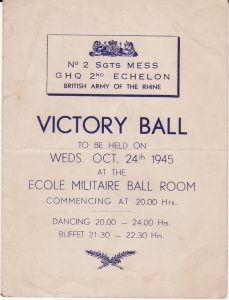 Ceremonies this week are marking the 75th anniversary of allied landings in Normandy.  This poem was originally published on-line at karnacology.com a wonderful blog and resource from Karnac publishers, now a part of Taylor & Francis, and no longer available.

The poem is a researched poem, generated from family papers and materials held at the Imperial War Museum.  It is written in memory of my parents-in-law, Robert and Joyce Brember, who met at the Victory Ball in Brussels.  The heading photo was taken at the Arc de Triomphe 10th May 1945.

Written as a sestina the poem roughly follows the form of six stanzas of six lines and a final triplet,  having the same six words at the line ends in six different sequences.

Behind every fighting man are fifteen more

You cried at the 50th anniversary. It had been a long wait

for the defences of a logistics man to give way; for emotion to attack

the pride you took in two years of preparation. The beach

of collective imagination, its gradients, capacity, a crusted land

on which to mount this all-out offensive. Yours was not the only wave

of enthusiasm tempered with fear, and a ration of sweets to stay

the pangs of home. It was a slow scramble: still time to stay

on that edge of youth. Time to pack your dancing shoes, wait

for the bus, reach the point of departure, with no-one to wave

but a land-girl in her field. And too early still for that attack

of nerves to reach your gut; ship sitting out storm in sight of land,

holding back its spillage onto the blackened rind of the beach.

Masters shout into the wind. Panic surges with a tide unable to stay

its progress. Now, this endless moment of men, this smoke, the land

too far, gradient too steep. Not enough to bear the massive weight

You are the reinforcement, you are the second wave.

Even so, a port or some jetties would have been helpful. Who waived

that particular request? Visible beyond the char of the beach

that first night. You are the reinforcement. Emergency rations stay

under wraps while you load trucks, stagger under the weight

of orders, schedules, armaments. This is a green and fertile land.

Think we can wait?

You draft in another round of men, stay

Onto the Victory Ball now for your legendary attack

of the dance floor, your neatness of foot. You land

the first dance, rough serge on skin softens as she stays

for the next. “Joyce, my name is Joyce” she waves

from the stairs, and you call out “Back home there is a beach

I want to show you. The geese still come and… please… wait!”

On the ebb of shot imaginations, waves

of guilt rasp along this beach, any beach.

You were very young, and nothing could wait.

9 Comments on “Behind every fighting man are fifteen more…”