The heading photo for this piece is an example of a parchmark, and here reveals the underlying architectural features of a former Prisoner of War camp on Merrow Downs. These marks have usually only been seen from the air or on Google Earth, but after the long dry  summer of 2018 they appeared brazenly in familiar landscapes.

When I am working with organisations on their brand and reputation, the question of what sticks – in people’s minds and in the public imagination is always one to consider: how fleeting are impressions,  how might they endure and run the test of time. The prisoner of war camp remains still in some local memories and has surfaced again, though some might wish to forget it.

The marks we leave, whether in our work places, or in the landscape is something that I think about in  ‘Here is where I have Presence’,  a contributing book chapter in an assemblage of work on attachment and place which focusses on the nature of memory, the nomad mind, and collisions of time and place. It suggests that ‘here’ is an under-explored aspect of working in the ‘here and now’ and that working with ideas on place and our associations and attachments to it, can be a valuable dimension in consultancy work that addresses role, identity and brand.  Here is an excerpt:

Memories, short-lived
as a politician’s. Stay
a-while, here are roots.

I have been living in the same house for 30 years (…another way of knowing my place/knowing this place), and knowing this too as a rare security afforded by place. My garden is slowly taking on the characteristics of the nearby downland, with a growing profusion of ox-eye daisies, pyramid orchids, bird’s eye trefoils and wild marjoram. At the end of this suburban garden is a small triangle of land that we have left to go wild and it is largely untouched. Dead wood lies where it falls. Over time the once functional shed has completely covered itself with ivy, and it hangs in dusty sheets through the gaps in the roof. The floor has rotted and been undermined by foxes, perhaps rats. Wasps’ nests attach to window frames. Inside is the detritus of old bicycles, broken chairs. It is the reality of a place left to itself, and sometimes I think that we should pull it down, but I leave it there, existing in the periphery of my experience. I am not sure what it symbolises and can think of it as a place of natural decay and re-generation, which allows me a slow-burning curiosity. I am though, more inclined to view it as an attempt at a permanence, which is nonetheless in a constant state of fragility and flux, and which another person at another time, might come and tidy away (for which substitute re-develop, re-possess, devastate, bomb) 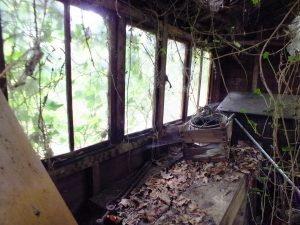 Forthcoming workshop:
12th July 2019 ‘Re-thinking the Here and Now: Working with ideas of Place as a dynamic aspect of role and change’ with Coreene Archer.