We have come down from the village of Agios Germanos towards the border with the Former Yugoslavian Republic of Macedonia (FYROM). This is a land of ancient orchards, vines, almonds, walnuts, above cultivated belts of the huge Prespa bean which dominate the region’s agriculture. Below us on the shoreline of Lake Prespa lies an area of dense vegetation. It is an ecotone; an area of transition  between land and water where, in the last 30 years, a belt of alder, juniper, birch and willow has grown up on land exposed by the receding waters of the Lake. It is a direct response to climate change.

It may be that these trees are the newest arrivals to this shoreline. Property here is sparse, and ownership of land complex and bound up in fragmented contractual and  historical arrangements. The lake itself is the meeting point between Greece, FYROM and Albania.  By coincidence I am here at a different transition;  an attempted collaboration to bring a new name, that of Northern Macedonia to bear on this Balkan republic. It’s not an easy process, feelings have run high, demonstrators have made their views known. 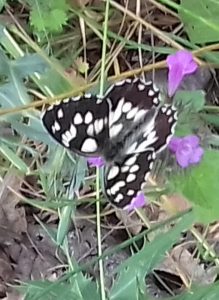 Trying to understand the long-standing turmoil of the region is to enquire into the multiple languages, ethnicities, shifting boundaries, and sense of belonging that permeates identities in the region. The decision or choice to rename a country slides like a fault-line through personal values and beliefs. It is where the personal meets the political, and it meets where 5.5 million years ago tectonic movement in the earth’s crust formed the Prespa Lakes and its surrounding mountains.

I’m being challenged to think more about the nature of identity, the questions of who I am, and who I can be here. What might it mean when names which define us or which convey our cultural histories, are disputed or feel appropriated.

Several times this week we have been stopped by police providing security for the Prime Ministers meeting to sign their agreement, and also to contain the protesters’ potential actions. The we, in this case is a group of naturalists and writers from the UK.  We come out with different identifiers, we’re English, Scottish, British, European, and I can regard myself as three of these. As we stood under our sun umbrellas declaiming a Britishness, I felt as if I were in Tea with Mussolini, an out-dated drawing on an imperialist past. How much more I would like to claim my contemporary, threatened and soon to be destroyed European identity. 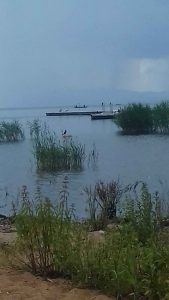 I am with Mark Cocker and fellow participants at Aghios Achillios, hosted by Balkan Tracks

and joined by Julian Hoffman

5 Comments on “What’s in a name? experiences of transition and identity”